It  was a perfect day when I visited, as I do every year, the eternally chic and expertly curated shop, Andrew Spindler Antiques, in Essex Massachusetts.  Long before 1stdibs.com had Andrew on its site, he was on my radar. I would consistently visit his shop, borrowing products for photo shoots. Always wanting to keep every item.

With regular visits to friends in the area I became a huge fan of Andrews and also recognized a great story when I first saw his utterly distinctive house in Gloucester, Ma. I wrote about it in the New York Times: http://www.nytimes.com/2010/06/03/garden/03location.html?_r=0

When I arrived at the shop that August day, Andrew pointed out new items as he always does. I swooned as I always do. It’s been an ongoing conversation we’ve had for  years:  “Look at these,” he’d say, showing me a pair of fiberglass chairs from the 1970s. Or educating me about a collection of 18th & 19th century engraved prints of theater interiors. Or quirky animal themed ceramics, including a mid-century modern walrus, that only Andrew can make seem elegant.

And then Andrew said, “I also have this incredible collection of envelopes written to movie stars in Hollywood in the 1950s.”

There, in a large glass case, ( that once held minerals at the Harvard museum) were the envelopes.


Inside were hundreds of empty envelopes that once contained personal letters written to movie stars: Clark Gable, Marilyn Monroe, Tuesday Weld, Richard Burton, and other giant stars from that era.It was surreal. The handwriting. Sometimes child-like; or obsessively perfect. Sometimes typewritten, other times in pencil. Almost always blue ink. Black ink wasn’t “in” in the 1950s. The addresses of the studios (Universal, MGM, 20th Century Fox) clearly marked (how did people know this before Google?)  The misspelled names. The faded ink. The postmarks from all over the world. 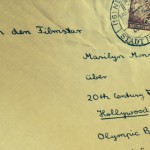 As we held the envelopes for a few minutes, Andrew said what I was feeling. “It’s all about longing.”

Two weeks ago on a return flight from LA, I watched the film SUNSET  BOULEVARD on the plane.  If ever there was a movie about fame,  the addiction to it, the loss of it, the loneliness behind it, and the longing for it to fill an empty life, it’s this great Billy Wilder classic.

I remembered the envelopes. I thought about what it must have been like to write to Marilyn Monroe, or Richard Burton. (“I have achieved a kind of diabolical fame. It has nothing to do with my talents as an actor. That counts for little now. I am the diabolically famous Richard Burton.”)

The envelopes are a relic of bygone era of fandom. Putting pen to paper, a physical act, that one hoped would be received by the other person. The pleasure was in the imagining.

“We are all of us stars and we deserve to twinkle,”  Marilyn Monroe.