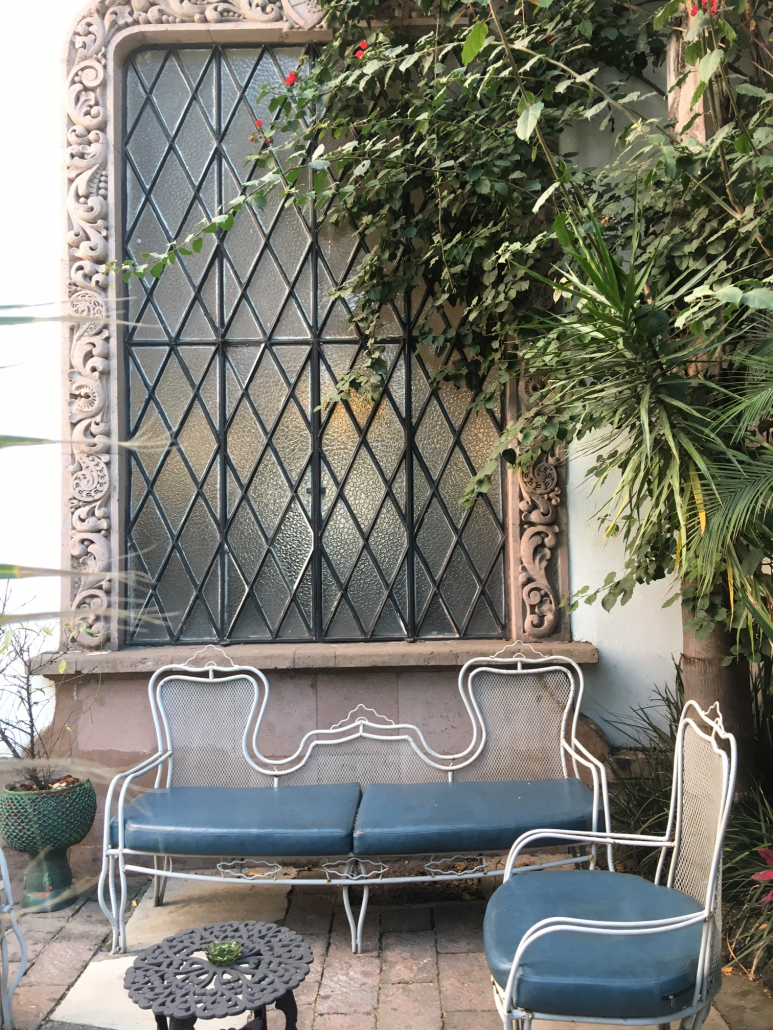 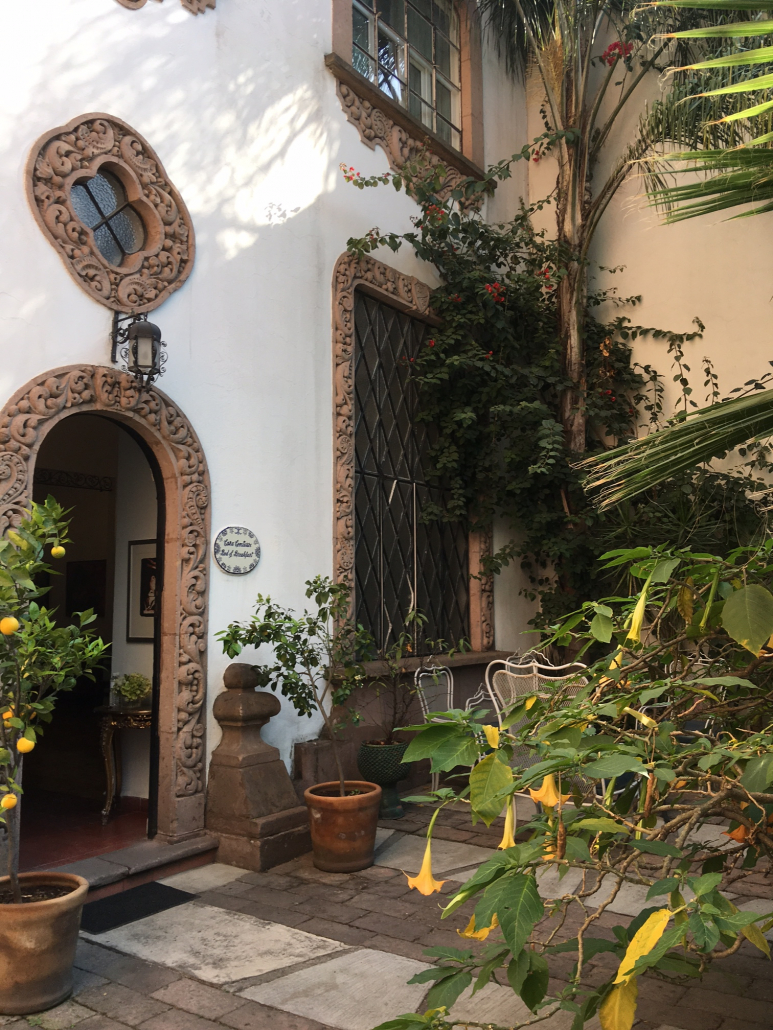 When I travel I often feel as though I’m a character in a play. A play that’s been going on for decades. It’s a kind of theater. What do I mean by this? When I go into a new city, a new hotel, it’s like entering a story that’s always being told— and now I get to be a character in it.  I believe it plays a part in why those of us who love travel become addicted to it. It’s liberating to feel someone else’s life; see the objects and collections others have lived with; even if it’s only fantasy. I want to immerse myself in someone’s history. Living, even for a few days In the houses of others, and to let our own story mesh with one that already exists— and is constantly evolving- is exciting.

That’s how I felt when I had the opportunity to spend five nights in a small hotel (B&B) in Mexico City. It’s really —as many hotels there are,  in the leafy, lovely, Colonia Condesa neighborhood— an old family home. 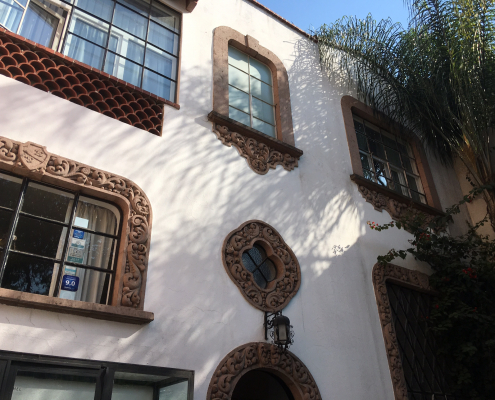 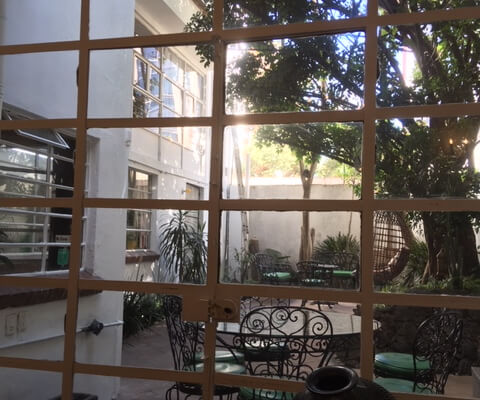 Arriving at Casa Comtesse, the afternoon sun washed across its detail laden facade and windows. The front garden was lush with old growth plantings. I thought about others who had also sat in this spot, warmed by the sun, smelling the hanging blossoms which opened and closed in their own rhythm.  I immediately spotted the really unusual patio furniture, which looked like it was from the 1960’s. 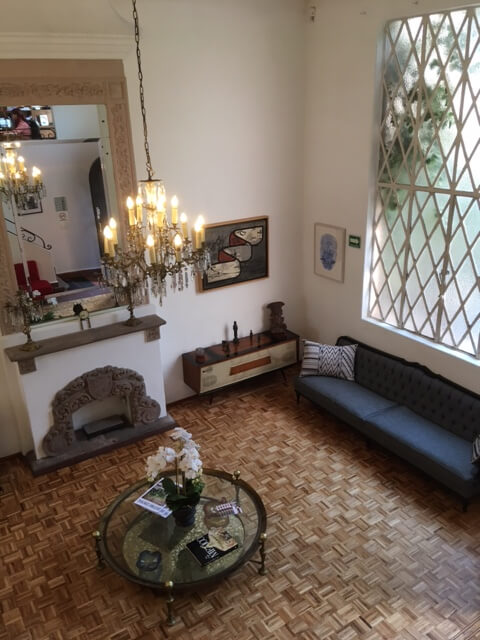 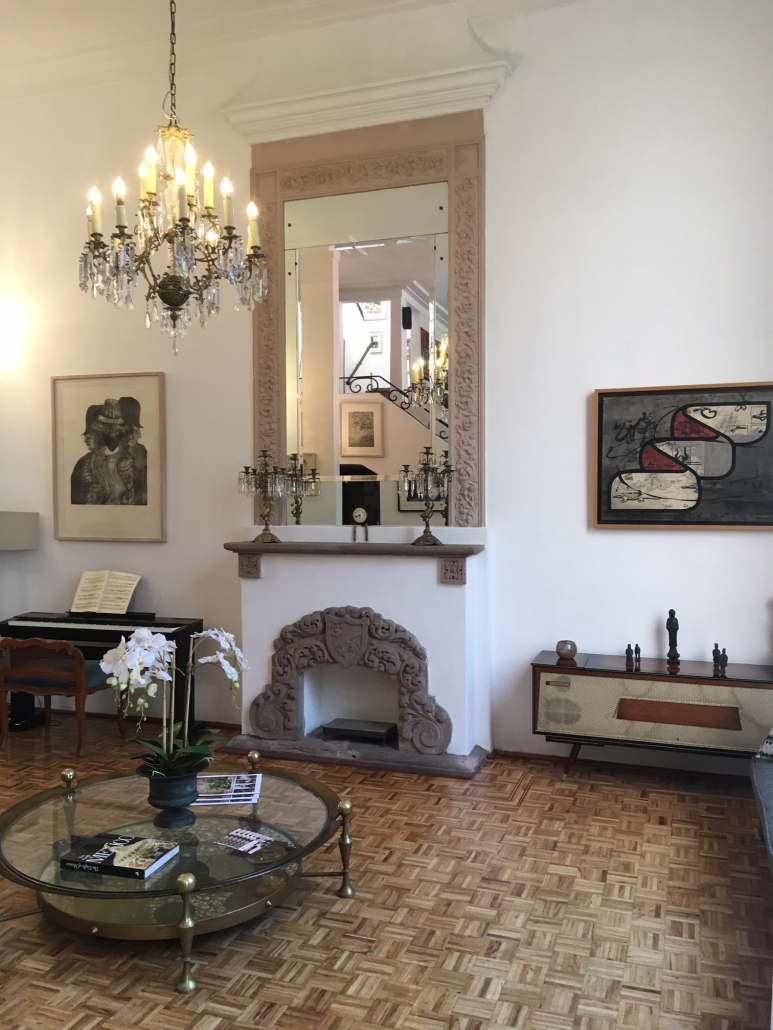 There was no traditional ‘lobby’ but a grand space that was the original living room of the house. High ceilings in the double height room create a sense of drama and the space is illuminated with beautiful filtered light from the large etched glass window with diamond patterned mullions.

Furnishings are a mix of midcentury pieces that have been redone and the original molding remains elegant. 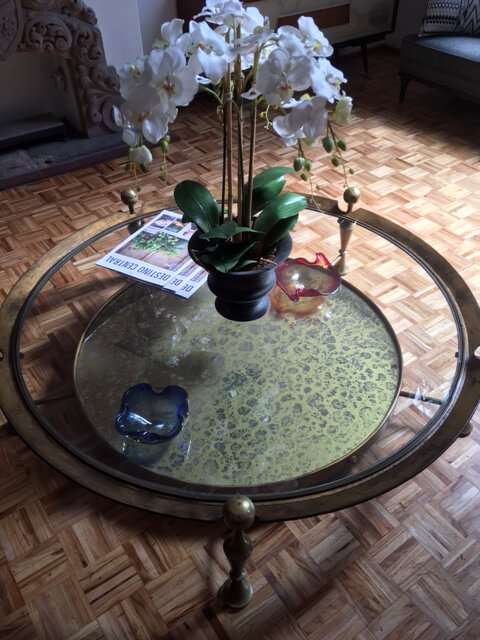 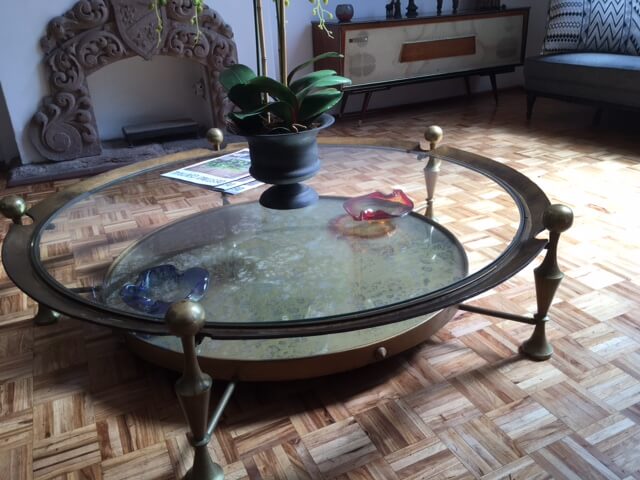 When I learned the history of the house, I fell even more in love with it. I was already smitten with the cocktail table made of brass, mirror, and glass, by renowned Mexican architect Mario Pani, and many of the other distinctive, well chosen pieces of midcentury furniture. 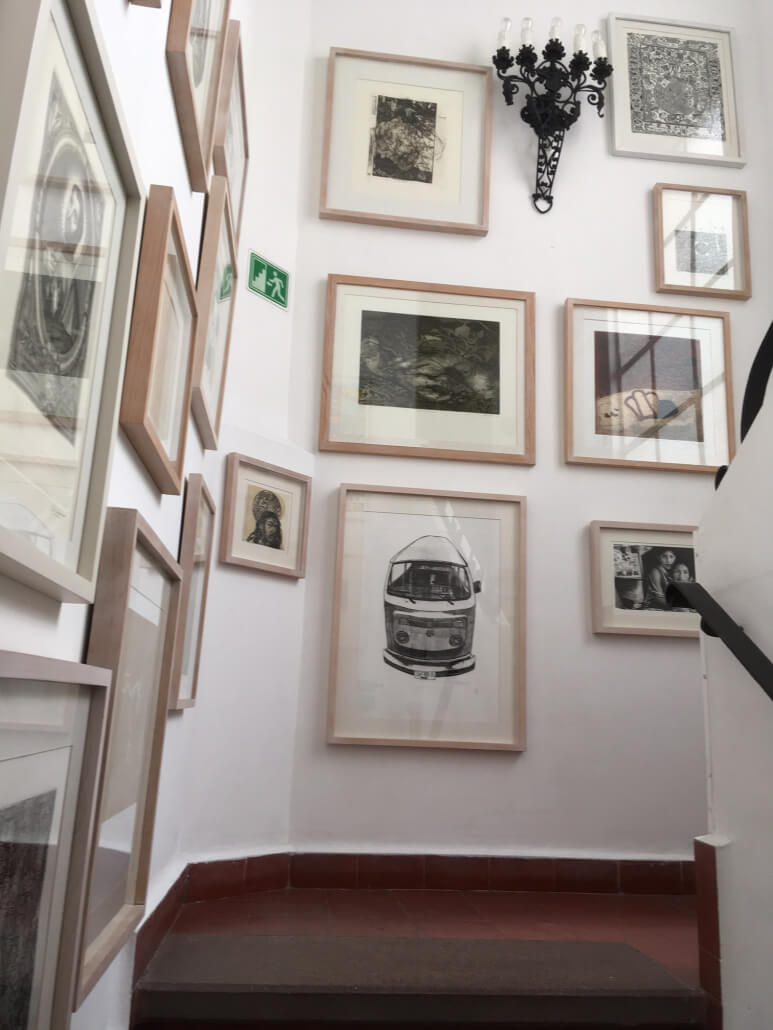 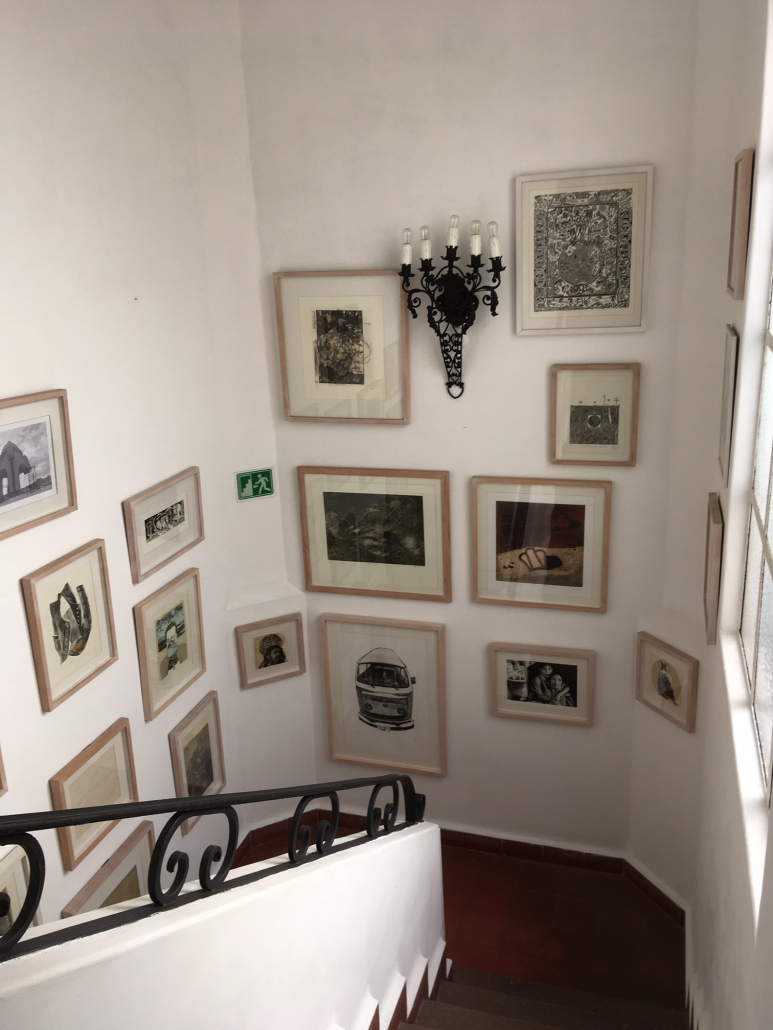 However, the walls covered with contemporary art covered walls made me most feel a character in an ongoing story. It was captivating; original art was everywhere. Climbing the stairway to my room, each time, was different and special, and I’d something anew.  All black and white work lined the walls. Photographs, prints, drawings. It helped me to better understand the role of art in Mexican culture. As did the stunning black Oaxaca pottery in the dining room, that I gazed at during breakfast. 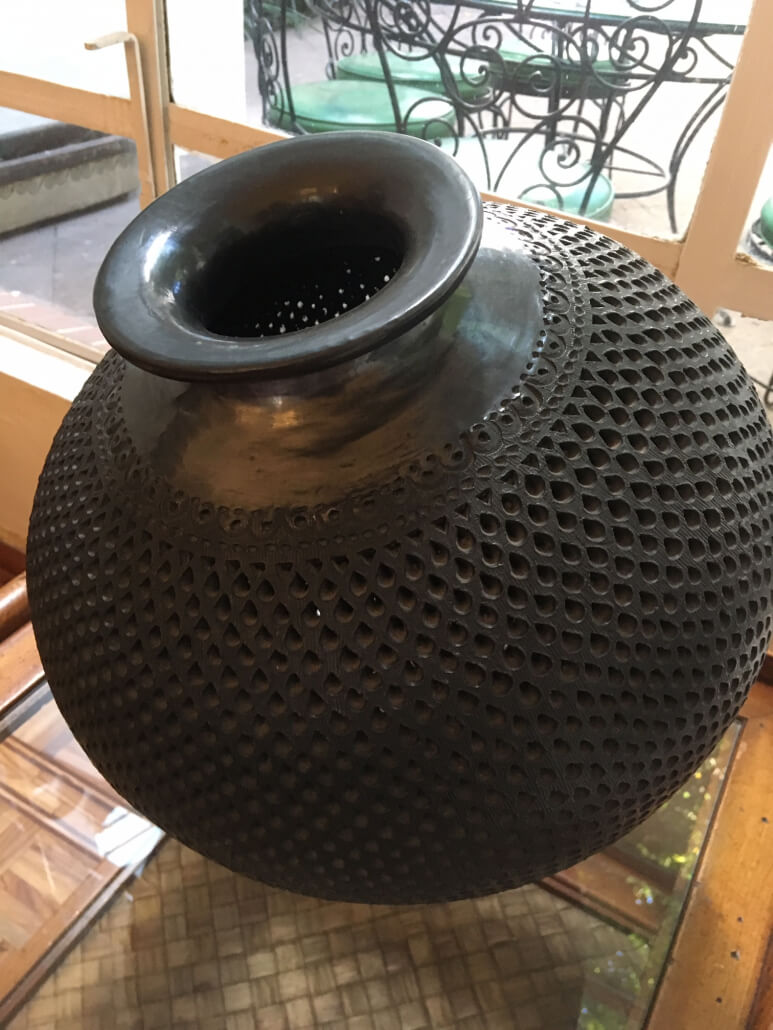 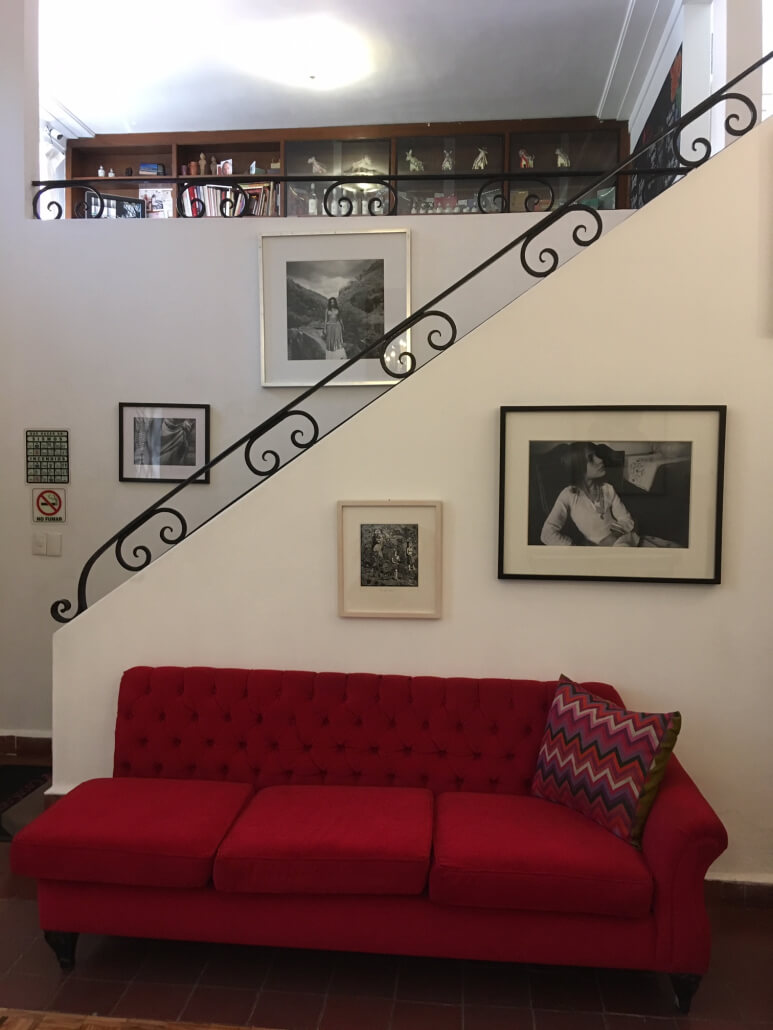 The 1942 house is classified by the Instituto de Bellas Artes as an historical monument, built in a Neocolonial-Californian style. The original owners, Ramon Sordo Perez and Ines Conzales Vares De Valdes, who were Jewish Spanish refugees fleeing the Spanish Civil war.

In the 1970s another family with 13 children  occupied the house.

In 2008, Casa Comtesse was purchased by Thomas Flechel  and Jose Hemsani Japan and converted into its current life as an 8- room B&B.

The Dean Hotel. Providence gets it’s own (Williamsburg) chic.
Scroll to top