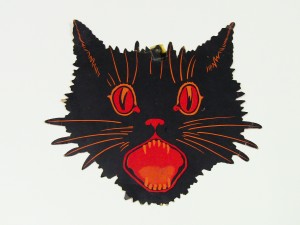 I unexpectedly discovered the exhibition Things That Creak in the Night: Selections from the Halloween Collection of Peter Paone at Philadelphia’s Woodmere Art Museum, last week and haven’t been able to stop thinking about how whimsical yet thought provoking it is.  Not only because Halloween has always been one of my favorite holidays, but because what’s on view there is an ingenious exhibition, representing only a fraction of the collection of Halloween toys and objects owned by Philadelphia print maker, Peter Paone. His has been a nearly 40-year quest to find vintage Halloween toys and objects; many are treasures that were made in the 1920s, 1930s and 1940s, and this week (HURRY!) can be seen at Woodmere. 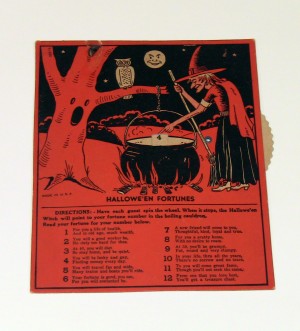 As an artist and printmaker this was very appealing to me. Also limiting the colors to just orange and black (an unlikely combination in color theory) was something that interested my approach to color; it’s very powerful.

It takes a creative and open minded museum director, and William Valerio, the director and CEO of Woodmere, is clearly that, to embrace such quirky subject matter, yet Valerio found Paone’s collection to be compelling and worthy of an exhibition. I asked Valerio why he decided to exhibit, what are essentially simple dime store tin toys, in a museum that is known for having important Philadelphia artists from Charles Wilson Peale, in the age of the American Revolution, to painter Sarah McEneaney, who today is a leading figure in the city’s increasingly vibrant art scene.

“We are showing the printed tin and paper objects because we consider them to be art,” explained Valerio. In fact, the companies that produced many of these items,  like Dennison and Avery,  hired artists in the 1920s and 1930s to design these toys and ornaments for mass distribution, and somehow, he points out, that even today,  the specific witches, cats, and pumpkin designs are immediately recognizable.  “When imagery has this kind of lasting power–a ubiquity that is taken for granted–it is important to recognize, consider, and think,” said Valerio. 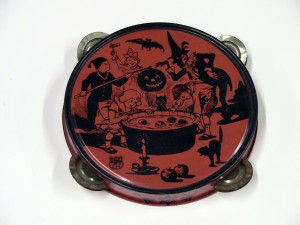 And, there is artistic technique involved in making toys and decorations out of lithographed tin. In fact, the manufacturers actually used a process known as offset lithography, which solved the problem of printing on tin.  By the 1930s the process was further perfected and machines were used to print designs on fifty tin-plated sheets per minute. Paone has built his collection from flea markets, friends who bought houses and found these objects in the attic, and thousands of visits to yard sales. He noted, “in the 60s they were everywhere now they’re gold.”